I`ve always loved autumn… Maybe because I was born in October, or simply because of its beauty: all those colors, blending together to spoil and delight our eyes, turning our surroundings into a sensational huge painting. There are so many reasons to love autumn: misty mornings, cozy days, longer nights and beautiful hikes in the Carpathian Mountains. Of course, there is a plethora of places to go and take in the beauty of fall, but I will mention only three destinations: the
2 views0 comments
Oana Barbu

From the People’s House to the Palace of the Parliament

Have you ever woken up in the morning searching for a reason to stand up, go to work, face the world? Have you ever thought of giving up, deeply convinced that nothing is really worth the effort? I bet you have. We all have. But I also bet that despite all the problems, we all found the resources to keep going and conquer our share of the world, no matter its size. Imagine what would have happened with Florica Maria Sas (aka Lady Florence Baker or Barbara Maria Szasz) if she
156 views0 comments

The Danube Delta – a paradise lost in time

Romania really is a wonderful country! Besides plains, rivers, hills and mountains, it has the Danube Delta: hundreds of bird species, white water lilies, an amazing maze of canals flanked by willows, a rich community of fish and animals: a paradise lost in time. From the moment you leave Tulcea, the last city proper before wilderness gradually takes over, and up until you come back to the city, you are amazed at the wonderful simplicity of these places. We left Tulcea on boa
69 views0 comments
Ilinca Stroe

Expats as Romanian Employees. The DOs and DON’Ts of Expat Linguistic and Cultural Integration

Even if English has been the official language in Romania-based multinationals for a while now, expats taking up long-term positions here may find it is not quite enough. Knowing Romanian, instead, can bring expats closer both to their local colleagues and the company’s culture and values. As the number of expat managers and staff working in Romania has gone up, there has been increased interest in Romanian language courses, especially since 2007, when Romanian became one of
59 views0 comments

Where to go on a sunny September weekend? Well, it’s not that difficult to decide, if you are a mountain lover. Since the weather had been forecast as sunny and clear last weekend, we decided to go to Negoiu Peak, the second highest in Romania ( 2,535 meters/8,317 feet), in the Făgăraş Mountains. We left Bucharest on Saturday morning, heading for to Transfăgărășan, declared one of the best roads in the world by BBC’s Top Gear. We started the hike at Bâlea Lake, eager to reac
13 views0 comments
Iulia Andreescu

If the French have Édith Piaf, and the Portuguese have Amália Rodrigues, Romanians have Maria Tănase. She was both a singer and an actress, whose voice, physical appearance and charisma, easily turned her into a national diva. Her music varied from ”traditional Romanian music to romance, tango, chanson and operetta”.[1] Maria Tănase was born in a suburb of Bucharest on 25th September 1913 . Her father was a master gardener and a florist, and also owner of a big nursery on t
235 views0 comments 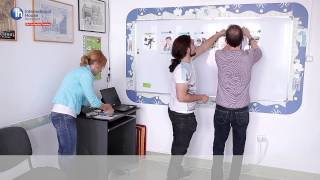 International House Bucharest has been in our country since 2002 and it is the leader of Language courses in Romania, a status which has been certified for many years since 2008 onward with the first place in The National Top of Companies in Romania, organized by The National Council of Small and Medium Sized Private Enterprises (CNIMMR). Why International House Bucharest?​ Romanian open courses are organised in groups of minimum 5, maximum 10 persons and take place in our sc
1 view0 comments
Iulia Andreescu

Marie - the Queen of Romania

One of the most prominent and loved feminine characters in the history of Romania is Queen Marie (Regina Maria). With a strong personality and a sincere love for her people, Marie managed to make herself and the country known worldwide. One of her favorite quotes was ‘Character is destiny’ attributed to the Greek philosopher, Heraclitus, and later, discussed by Frederick Nietzsche. In this article, we are going to see how her strong and vivid character shaped her destiny.
485 views0 comments
Oana Barbu

The Hunyad Castle: Where reality fades away

I was still at the age of dreaming about princesses and castles when I visited one for the first time. Back then, it seemed to be taken out of fairy tale books, exactly as I pictured it in my mind whenever my mother was reading to me stories before going to bed: it had fortresses, bastions and endless bridges and a marvellous view. Looking around, only the characters were missing, but their traces could be found at every turn, their presence could be felt in every corner and
32 views0 comments

Now, when I look back at that experience, I can say: “Wow, what an adventure!” Piatra Craiului is indeed an adventure with breathtaking views, spectacular crests, deep gorges, encounters with wild animals and rare plants: floarea de colt (Leontopodium alpinum or edelweiss) and garofita Pietrei Craiului (Dianthus callizonus), the symbol of Piatra Craiului National Park. We set off from Brusturet Cabin, an abandoned shelter in Arges County, through Valea Seaca (the “dry valley”
15 views0 comments
Oana Barbu

Hey, you! Yes, you! I bet you are a football fan! Or maybe a handball, basketball, baseball fan! Or maybe you are more of a winter sports’ person! It really doesn’t matter! Because I am sure you have never heard about OINĂ! But please, don’t feel bad about it! Most of the Romanians did not hear about it either or if they once did, no one remembers it anymore as the national sport of Romania! So, let me introduce you OINA, Romania’s forgotten national sport! Denominations You
1,273 views0 comments
Ilinca Stroe

This light-hearted yet quite pragmatic series of posts focuses on verbal mannerisms in contemporary Romanian to give you a hint of where they might come from, a bit of an insight into the cultural implications they might carry, and an idea as to when you might want to use them, in your Romanian-speaking experience. Having tackled the nice and neat, Latin-inspired making of “hai, pa!” (Part I) and “nu-mi spune!...” (Part II), having tiptoed among some of the mysteries of ellip
9 views0 comments
Oana Barbu

IA - The Romanian Blouse (A synthesis of tradition and modernity)

For a long time, tradition and modernity were perceived as two opposite concepts. Until recently, tradition was seen as an obstacle to progress and modernization. The perception has changed as a consequence of the debate concerning the effects of globalization on cultural heritage. This debate led to reconsider our own cultural identity and rediscover the things that make us unique in the world. Suddenly, tradition was reconceptualised and became the source of inspiration fo
76 views0 comments

Mălăiești Chalet is located in the northern of the Bucegi Mountains at an altitude of 1,720 metres and it offers shelter for tourists who want to hike in this area. The climbing might be physically demanding, but it is very rewarding. You don`t need professional climbing equipment, just a pair of good shoes and a bit of craziness. There are many paths that take you to Mălăiești; you can start either from Gura Diham or from Râșnov. The easiest and the shortest one is from Râșn
9 views0 comments
Diana Nechifor

Sânziene - the word designates an annual festival held in honor of the fairies. Etymologically, the name comes from the Latin Sancta, Diana,
109 views0 comments

The Influence of Slavic Languages on Romanian

A Latin-origin language, Romanian has been heavily influenced by Slavonic, which gives it a peculiar character, compared to the other Romance languages. The influence, manifest over several centuries, can be divided into two stages: (i) the old Slavonic input, and (ii) more recently, the 18th-19th-century imprint of the Slavic languages in the area, namely Bulgarian, Ukrainian, Serbo-Croatian and Russian. There were several levels of Slavonic influence on Romanian: phonetic,
1,480 views0 comments
Enida Cincora

The Influence of French on Romanian (A Historical Overview)

As early as the 18th century, the Romanian Principalities started being strongly influenced by French due to the reigns of Phanariote Greeks appointed princes in those territories by the Ottoman Empire. The Phanariots regarded French as the “carrier of a rich culture” [1], they learnt it and so they facilitated the Romanians’ first tentative contact with French language and literature. In 1775, Prince Alexander Ypsilantis [2] reorganised the education system in Wallachia base
2,652 views0 comments
1
2
3
bottom of page